At the beginning of God’s creating

of the heavens and the earth,

when the earth was wild and waste,

darkness over the face of Ocean

Fox in a footnote says that this is an example of “God bringing order out of chaos, not creation out of nothing.” (Cf n 2, p 13)

Creation out of nothing has been a frequent argument used by atheists — or “people who exhaust me at any party” — to explain the alleged (dare I use the word) jejune philosophy and cosmology of Genesis. “How can something come from nothing?” 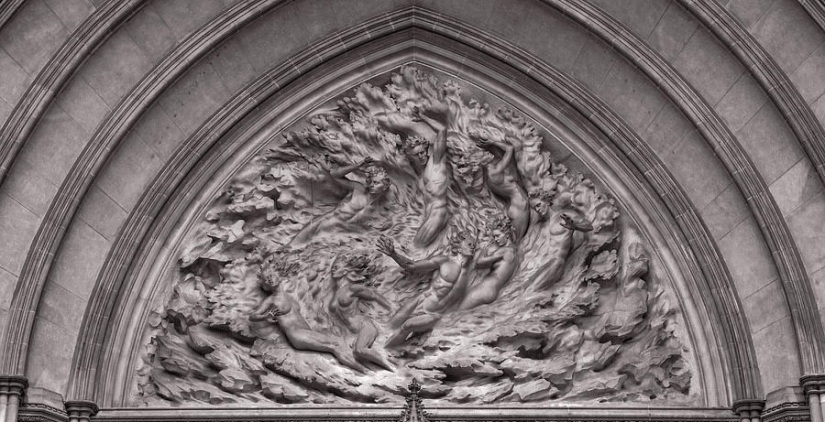 (Jejune is one of those words I read when smart people write and I think I’m using it correctly, but maybe you’ll gently correct me in the comments if I meant some other word entirely.)

This isn’t helped when theologians and Bible scholars use phrases like ex nihilio — a fancy, Latinate (?) way of saying “out of nothing” — to describe what the Bible itself doesn’t say. This isn’t creation out of nothing, and we might misread the Bible if we think of creation in this way.

It can be a translation issue, too. Fox’s translation gives us an earth that exists, but is an unorganized wild waste. The King James, New Revised Standard Version, and the New International version all use some form of the phrase “formless and void” (or “empty” or “without form”). And it’s those translations that have fed this orthodox idea of creation ex nihilio.

(“Orthodox” is a key idea here. Just because something is orthodox doesn’t make it immediately suspect, just like radical readings of the Bible also have value. I’m using “orthodox” in more of a “received wisdom” way; but the Bible is for reading and interpreting.)

But we have a chance to read this passage differently. It’s order out of chaos. I almost want to say that order out of chaos represents a moral universe; however, when we get to Eve’s temptation (Gen 3:1-6), I think something else is being said about aesthetics and morality, and order out of chaos has the objective trappings of aesthetics. Order isn’t necessarily moral.

We’re left, though, with creation out of something: out of the wild and waste. Out of Ocean*. Out of whatever darkness is. We have to be willing to read with new eyes.

[* Fox notes (n 2, p 13) that Ocean, capitalized, could refer to a “divine image” of the primeval waters. It’s also useful to note that when god separates waters so that land and water are separated, he calls them seas, rather than Ocean, because he does not want to recognize/invoke another deity. This is also why the Bible uses the clumsy designation “greater light” and “lesser light” rather than Sun and Moon. Those words, in Hebrew, are the names of deities, and the Bible wants to impart a monotheistic vision.]

Wolf Hall is the best book ever written in the English language. Flannery O'Connor is always right. I miss Gerard Manley Hopkins. I live, laugh, and love in Rockville, Maryland. View all posts by Mike Bevel

Everything You Always Wanted To Know About Science And The "Supernatural" (But Were Afraid To Ask).

Diary of an Aesthete

My understanding of human experience from a Judeo-Christian world view.

a free program of the Friends of the Bethesda Library

In the Shadow of Babylon
Small | Wire

"My faith is a great weight."